Dementia is an umbrella term used to describe a variety of brain illnesses that affect cognition, often perception and the ability to perform everyday activities. When a person suffers from two types of dementia together, it’s called Mixed Dementia. This isn’t uncommon, but whatever the diagnosis, each person will experience their disorder in their own unique way.

The most common cause of dementia in the UK today is Alzheimer’s Disease, effecting an estimated 850,000 people. Most people who develop Alzheimer’s do so after the age of 65, but younger people can also get it. Early signs of Alzheimer’s are usually associated with memory loss. During the course of the disease, abnormal clusters of protein fragments build up in the brain. This causes a loss of connections between nerve cells. Eventually these nerve cells die, resulting in the gradual loss of brain tissue. People with Alzheimer’s also tend to have a shortage of those chemicals in the brain, which help transmit signals between brain cells. A shortage of chemical transmitters results in information and signals not being transmitted affectively. Find out More

This type of dementia is caused by problems with blood supply to the brain. It could occur after a stroke, or as a result of blocked arteries, blood clots, or damage to the blood vessels in the brain. The symptoms of vascular dementia vary and may overlap with those of Alzheimer’s disease. These can manifest as memory loss and problems with reasoning, concentration, speech and visuospatial skills. Affecting 150,000 people in the UK, Vascular Dementia is the second most common type of dementia.

Closely related to Parkinson’s disease, Dementia with Lewy (DLB) bodies often has some of the same symptoms. These include cognitive problems with attention, fluctuating alertness as well as movement. There may be periods when speech becomes disorganised. Sleep disturbance is also common, as well as hallucinations, delusions and difficulties judging distance. With DLB, memory is usually affected less than in early Alzheimer’s disease.

Lewy bodies are abnormal structures, formed of tiny protein deposits, that develop inside the brain cells. How someone is affected by DLB, partly depends on where in their brain the Lewy bodies form. There are many other progressive disorders caused by Lewy bodies, which effect the brain and nervous system. One of these is Parkinson’s Disease. DLB is often also referred to by other names, such as Lewy body dementia, Lewy body variant, Cortical Lewy body disease, and diffuse Lewy body disease.

There are three main types of FTD, and the symptoms of the disorder will depend on which type a person has. These are:

Behavrioral Variant is the most common type. Signs and symptoms include behavioural changes like apathy; a loss of sympathy, empathy and inhibitions; as well as repetitive, compulsive behaviour such as hoarding and time keeping.

Progressive non-fluent Aphasia and Semantic Dementia are referred to as the language variants. This variant of FTD causes difficulties with language, which appear slowly but gradually get worse. Symptoms include slow hesitant speech; errors in grammar; impaired understanding; not knowing the meaning of familiar words or not being able to find the right word; and difficulty recognising familiar people and objects.

Up to 20% of people with FTD also develop a motor disorder, which causes difficulties with movement. These are Motor neurone disease, Progressive supranuclear palsy, Corticobasal degeneration. 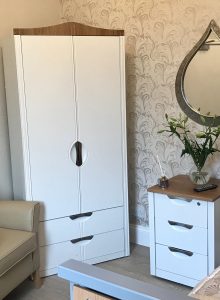 "Cedar Grange Care Home is a lovely friendly place. The staff appear to be very dedicated to the service users and appear to genuinely care about them. I visited a few care homes before choosing Cedar Grange, it possessed a lot of warmth and felt inviting. The manager appears to have some good innovative ideas which contribute to the well being of residents."